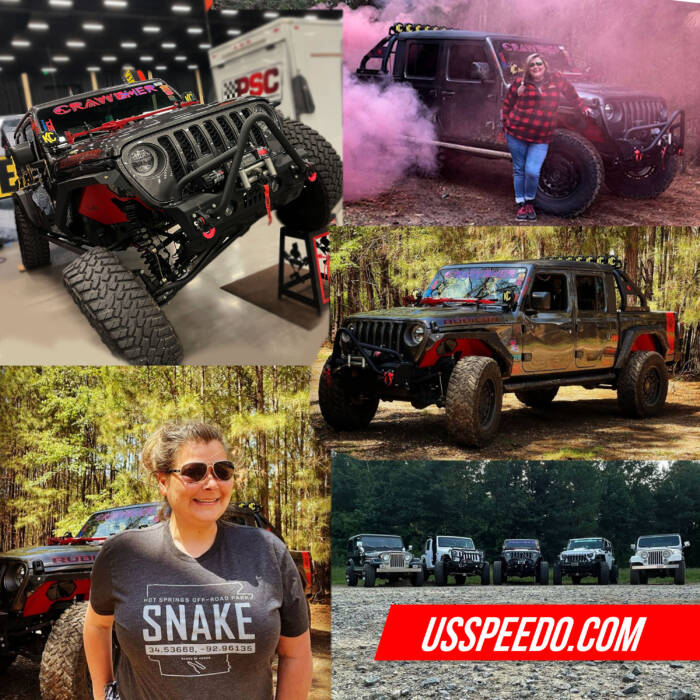 Staci Ward with her Jeep, Tushka . the newest ambassador to the US Speedo family.

“Some of the best people I’ve met in my life have been Jeepers,” said Staci Ward when asked her favorite part about being a Jeeper. Staci is the owner of @Tushka.Jeep, and is our newest Gold Level Ambassador! US Speedo had the pleasure of talking to her recently about some of her experiences as a Jeeper, which go back to her childhood. Staci’s father always had a Jeep, and they spent many hours riding around in them and wrenching on them together. Now she shares her love of Jeeps with her husband and two sons.

Being a woman in the automotive community comes with its own set of obstacles, of which Staci has faced head on. She told us a story about the first off-road trip she took her Gladiator on that perfectly described facing those obstacles, both literally and figuratively: “…we went wheeling the other day. It was the first time we took the Gladiator…I was the only woman driving. There have been tons [of times] when I was younger and more intimidated, when I would let that really get to me and I wouldn’t have done it, but knowing even though there weren’t any women there at that trip…knowing that there are tons of women out there, it’s empowering to get out there and wheel your own Jeep, so I did it.”

Staci also works with CrawlHer, one of our other Gold Level Ambassadors. Tushka, her Gladiator, has been featured in their booths at multiple shows, including Jeep Beach in Daytona Beach, FL. She spoke to us about some of her favorite experiences working with them. “Getting out there and meeting people. It’s been great, and that’s the first time I came across a bunch of grateful women that were crazy about Jeeps and enjoyed it as much as I did, and we are all positive and lift each other up and just empower each other.”

When asked if there were any other brands she had come across that she liked, Staci was kind enough to mention US Speedo. She currently has our Daytona Edition for JL/Gladiator in teal, that she installed herself. Staci told us that she loves looking at her dash while she is driving and “seeing that little pop of color instead of just a plain gauge”. We could not agree more! Staci lives in southeast Arkansas, but makes her presence known by attending lots of shows in the southern US, including Jeep Beach in Daytona Beach, FL, and Great Smoky Mountain Jeep Invasion in Pigeon Forge, TN.

Not Finding The Products You’re Looking For?

We produce new parts based on your feedback! To request we produce a specific product or to request a full custom part, please visit our product requests page!