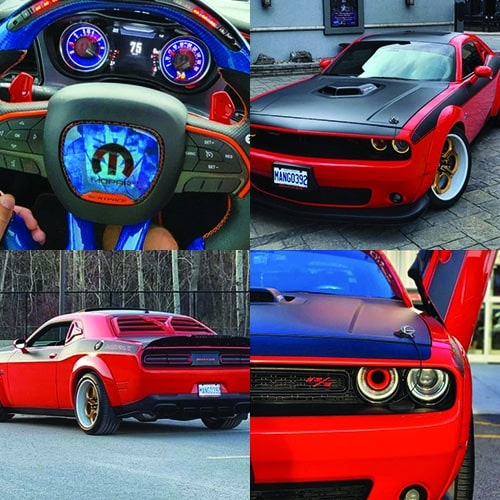 “I am a major Mopar guy”

If you ever have the pleasure of talking to Christopher Sauve, you will quickly learn how much he really loves being a part of the Mopar Family. Christopher’s first Mopar build was a 2011 Charger SXT, and he’s been hooked ever since. “I started adding parts to [the Charger] and once that was paid off…I finally decided it was time to have a V8”. In September of 2017, Christopher bought his 2017 Challenger Scat Pack Shaker, which he has since turned into a Widebody, and is one of the stars of his Instagram page, @mango3ninety2.
Christopher has worked hard on his Challenger and enjoys spending time with fellow car enthusiasts every Friday at the Cornwall Road Warriors Club, that he formed just a few weeks ago. The club is open to vehicles of all kinds, from a 1922 Ford Model T to a brand-new Dodge Challenger Redeye. Recently, the club participated in a fundraiser at a local mall to rally over $2,000 in donations for their local hospice. They have also raised funds for Maison Baldwin House, a local women’s shelter. “It’s been a busy nine weeks,” said Chris, “…it’s crazy. It’s going really well.”
Christopher also created a Facebook group for fellow Mopar fans: Dodge Charger Challenger Group and anything Mopar. The group has been up for about four years, and currently sits as 214.4k members. As do some founders of groups this large, Chris continues to run the page as an admin. When we asked him what that has been like, he told us that while it can be stressful at times, he has learned the true importance of respecting everyone, and respecting everyone’s builds. “Everybody’s build is unique to themselves”. At the end of the day, it’s about the heart of the hobby.
We are so proud to be a part of Chris’s Challenger build, and to have him as our newest Gold Level Ambassador! Be sure to enter his giveaway for your chance to win your choice of US Speedo Gauge Faces for 2015+ Dodge Chargers and Challengers!

Not Finding The Products You’re Looking For?

We produce new parts based on your feedback! To request we produce a specific product or to request a full custom part, please visit our product requests page!